Its All In The Build

A Guide To The Structural Traits Of Crested Geckos

Its pretty common knowledge that crested geckos come in a wide variety of colors and patterns.  But did you know they also come in a variety of shapes & sizes?  People often ask me about the structure of crested geckos – What makes a gecko “crowned”?  What does an “upturned crest” look like?  What does the term “gator head” mean?

Here’s a fun picture guide to some of their structural qualities.

*note – This is only meant as an explanation of some commonly-used terminology.  This is in no way meant as a scientific guide and I am in no way implying that these are set standards for the species.

Crowned  – This term is in reference to the head shape of a crested gecko, specifically its width.  This refers only to the size of the head, not length of the actual crests.  There are standard reports written to define a crowned gecko, comparing its head length to its head width to define the crowning, however these reports vary, some stating that the gecko’s head length must be less than 1.3 times its width, and others stating the length must be less than 1.5 times its width.  I personally do not have the patience (or a gecko cooperative enough) to actually measure the head.  Basically, a wide head = a crowned head.

Luca’s very wide head qualifies her as a “Crowned” crested gecko.  Her very wide belly is just a bonus! 🙂

Floppy Crest – Unlike floppy tail, a floppy crest is a very desirable quality in a gecko.  Floppy crest refers to when the gecko’s head is either very wide or the crests are very thick, so much so that they droop or “flop” down onto the sides of the gecko’s face.  This is most noticeable when viewing the gecko from the side profile.

Fii’s head is so wide that her crests flop downward & rest on her cheeks.

Bald or Baldy – This term refers only to the length of the crests, not the shape of the head.  A “Bald” or “Baldy” gecko is one whose crests are very short & undefined.  Essentially…a crested gecko without crests!!  Baldness is not considered a desirable feature for a crested gecko.

Monroe may have amazing color & a great head shape, but her lack of crest length defines her as a “Baldy” gecko.

Jane has one of the widest set dorsal stripes I have ever seen.

Jane’s son Snider has a wide set dorsal, just like his Mama!

White-Tipped or Orange-Tipped –  This refers to the color of the crests of the crested gecko.  Most often, the crest color will match the over all head color.  When the crest color differs from the over all head color, it is called “tipped”.  The most common “tipped” colors are white or orange.  Sometimes all of the crest will be “tipped” in either white or orange, and sometimes just a few of the scales will display the color.  This is usually an either/or situation.  It is very rare that the crests would be “tipped” in both white and orange.

The White-Tipped crests on Nuclear So & So are very striking against her darker head & base color.

Furry or Fuzzy – This refers to the scales along the dorsal stripe.  Typically there will be one row of elongated scales defining the edges of the dorsal stripe.  With Furry or Fuzzy geckos, several well-defined rows of elongated dorsal scales are present.  Bigger is better with this trait.  Typically, geckos showing this trait will display the most rows of scales toward the base of the tail.  The more complete the row is from the base of the tail up to the neck, the better the example of the Furry trait.  The overall length of the dorsal scales also defines the quality of the Furry/Fuzzy trait.

Oopsie is a good example of a Furry gecko, with several rows of nicely elongated scales all the way up & down his dorsal.

Gator Head – A Gator Headed gecko is one whose head length greatly exceeds its width.  The snout is quite long & somewhat resembles that of an alligator.  A Gator Head is pretty much the opposite of a Crowned crested gecko.  This term only refers to the shape of the head, not to the length of the crests.  While there are several people who find this to be cute, because it goes against the more square-shaped head defined in Crowning, it is not considered a desirable trait.

Portholes – This refers to the scales along the sides of the gecko’s body, and while they sometimes match the base color of the gecko, they are often displayed as white or cream-colored.  Not to be confused with “Lats” (the lateral lines expressed across the gecko’s sides which define a break in color), portholes are displayed as elongated body scales.  Portholes can pop up all over the gecko’s body, but the best examples are those that appear as white or cream & that are situated in somewhat straight line across the sides of the gecko’s belly, thus resembling portholes on a ship.

Jaymay’s portholes appear as a line of dots straight across the side of the belly…just like the portholes of a ship.  Its hard to tell here, but all those white scales are slightly elongated.

Its easy to see in this picture that Mordecai’s portholes are not just white spots, but nicely elongated scales. On a side note, Mordecai is also displaying the “Furry” and “Crowned” traits!!

Lats, Laterals, and Quad Stripe – Laterals are not a structural trait, but I am including the definition here to help explain the difference between this & portholes. This refers to the striping that appears across the sides of the gecko’s body.  These markings are most commonly seen on crested geckos classified under the “Pinstripe” morph.  The lateral line typically appears about midway up the belly & will define a break in color along the body.  The line can be full or broken, and can be expressed as a straight line or in waves, slashes, or spikes.  Lateral markings displayed in a broken line are often called “Lateral Dashes”.  The lateral markings are not always symmetrical & can differ greatly from one side of the body to the other.  When the line appears as full & unbroken on both sides of the body, and this is displayed in combination with complete dorsal pinstriping, the common term used is “Quad Stripe”.

Teller has a broken lateral line on one side…

…and a more complete lateral line on the other. The lateral lines are usually displayed on “Pinstripe” crested geckos, and may differ from one side of the body to the other. Teller’s Laterals provide a stunning visual break in color here, making the contrast between his creamy belly & pinstripes, and his darker orange base color really pop.

Upturned Crests – This refers to the position of the crest only, not the crest length or the head shape.  Most crested geckos have crests that stick out straight or that flop over onto the cheeks.  Crested geckos with Upturned Crests, have a display that defies gravity & points upward instead of downward.  It is an under-appreciated trait in my opinion.

Horned – A Horned gecko has very elongated scales set on the widest point of the crest.  There are usually two elongated scales on each side of the head, giving the appearance of “horns” such as those found on cattle.

Dandy is a very good example of a “Horned” crested gecko, with clearly defined elongated scales located at the widest point on his crest.

Frog-Butt – This is not really a structural trait, but it is a commonly used term in the crested gecko community, and one I thought worth mentioning here.  A Frog-Butt is, very simply, a gecko who has dropped its tail.  Because crested geckos do not have the ability to regenerate their tails, if it does drop, its gone forever.  The hind end of a crested gecko sans tail closely resembles that of a frog…thus, Frog-Butt.

Crested geckos can drop their tails as a defense mechanism…but they can’t regenerate them.  Often, just a tiny nub is all that remains, earning tailless crested geckos the silly nickname “Frog-Butt”! 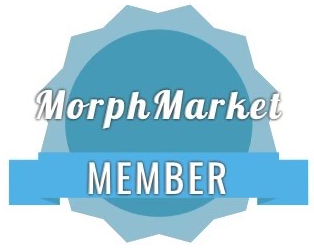 Subscribe to our email newsletter & receive updates right to your inbox.

About The Gecko Geek